I’m very excited to announce that my hardboiled/giant monster mashup novel, Mayday: A Kaiju Thriller, is now available! If you’re excited about the new Godzilla movie, this is the book for you. It’s available right now in ebook forms on Amazon, Kobo, Apple, and Smashwords. . Now available at Barnes & Noble as well! And if you prefer to read in paper, the paperback is also available on Amazon.

As a special thank you to all you fantastic folks, the ebook version of Mayday is only $0.99/£0.77 (or equivalent) at all of the above outlets for the next week. So get in quick and grab your copy before it goes back to the full price of $4.99.

I’d really appreciate it if you could help me spread the word about Mayday. Tell a friend, write a review, or post a link on Facebook. Anything you could do to help would be fantastic.

You guys are the best. Happy reading, everyone!

A quick update and a question for you all

Another semester of challenging postgraduate work has begun, so naturally I’m procrastinating. Here in the Strange office (that’s the tiny nook in my apartment containing my computer, a few dozen posters of vintage sci-fi movies, and of course, my Gamera figure to keep me company) I’m gearing up for a new release that should be hitting virtual shelves within the next couple of months. There will be more about that in my next post, but until then I should get you fine folks up to speed on recent happenings.

You may recall that my superhero novel Don’t Be a Hero was nominated in the Best Novel category of this year’s Sir Julius Vogel awards. Sadly, I didn’t take home the award, but I want thank everyone who nominated or voted for the book. You guys are awesome. And I want to extend a huge (belated) congratulations to all the other finalists and award-winners. It was a pleasure and and an honor to be in such great company.

Writing continues on as always. I’m in the middle of drafts for two different novels at the moment. One work in progress is another superhero novel, while the other is something a bit special I’m keeping under my hat for the moment. I’m plugging away, although never as fast as I’d like. I’ll have more information on those books in a few months when they’re closer to completion. In addition, I’ll hopefully have a superhero short story set in the same universe as Don’t Be a Hero out before too long. The story itself has been done for a little while, so now we’re getting the cover and formatting worked out. It’s a fun little story that I hope will keep you guys sated while you wait for me to hurry up and finish more novels.

Before I sign off for today, I want to ask you guys a question. For the most part, this blog has been a way for me to keep you updated about what books of mine are out and other bits and pieces of news. It’s intended for those of you who have read something of mine or are interested in doing so. I don’t really write posts hoping to get huge page views or draw in random people from the Internet. (Although, if you have stumbled in here from the ether, welcome! Grab a seat by the fire, watch out for the spiderdogs, and don’t drink anything anyone offers you.) But since I’m soon going to be sharing this space with another pen name of mine (more on that in the next post), I thought this would be a good time to ask you all what you want out of this blog.

Are you happy with it as it is, with me posting occasionally when books are coming out or when something related to my writing has happened? Would you like me to discuss a greater range of topics, such as my writing process or movies/books/games I’m currently enjoying? Would you like to see me doing vlogs (video logs)? Should I post the bad poetry I wrote years ago? (You don’t want this one. Trust me.) Should I get personal and give you insights into my real life, warts and all? Are you guys interested in peeking behind the curtain?

Let me know. This blog is partly for me but it’s also for you. I love you guys. If you have any suggestions, leave a comment below, Facebook me, or email me at chrisstrangeauthor@gmail.com.

don't be a hero, ebooks

The Man Who Walked in Darkness (Miles Franco #2) is now available! Plus a discount! 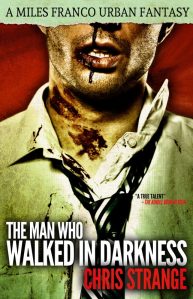 After much delay, the second book in my hardboiled Miles Franco urban fantasy series is finally available as an ebook. I know some of you have been waiting for this, so I hope you enjoy it. The book, titled The Man Who Walked in Darkness, is currently up on Amazon Kindle and at Smashwords. I expect it to be up at B&N, Apple, and Kobo soon, with the paperback coming in a couple of weeks. You’ll find the links below.

If you’re unfamiliar with my Miles Franco books, they’re a series of slightly insane urban fantasy books filled to the brim with twisty-turny plots and larger-than-life characters. To celebrate the new release, I’m running a sale on the first Miles Franco novel, The Man Who Crossed Worlds. For the next week you can pick the ebook up for $0.99 (or equivalent) at Amazon or Smashwords, so now’s a great time to get into the series or share it with friends and family.

Here are the links to the books:

Smashwords: http://www.smashwords.com/books/view/108753 (Use the coupon code RN38R at checkout)

The Man Who Walked in Darkness (Miles Franco #2):

Thanks everyone. Stay awesome.

The Man Who Walked in Darkness has a release date!

News time! After much delay (entirely my fault), the sequel to The Man Who Crossed Worlds is nearly here. The ebook edition will be available June 21st 2013, with the paperback soon after. Woot!

The sequel, titled The Man Who Walked in Darkness, follows freelance Tunneler Miles Franco as he deals with the aftermath of the events of The Man Who Crossed Worlds. Here’s the blurb:

Miles is back for another round of hardboiled pulp action in the two-fisted sequel to The Man Who Crossed Worlds. 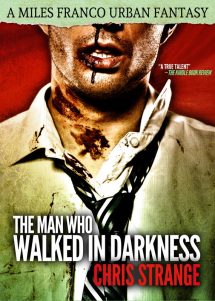 Freelance Tunneler Miles Franco is having a bad time of it. He’s facing a trial that could see him spend the rest of his days in prison. Hallucinations of dead men haunt him day and night. And to top it all off, one of his bandmates has been poisoned by a toxin from another world.

Miles doesn’t take kindly to people killing his friends. Now he’ll have to walk the darkest road he’s ever been down. With corrupt corporations on one side and fanatical interdimensional gangsters on the other, he doesn’t hold out any hope he’ll come out of this alive. But he has a promise to keep.

And Miles will burn every last world to the ground if it gets him answers. 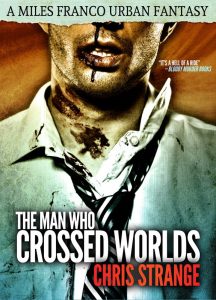 That’s not all. To celebrate the release of the new book, the first Miles book will soon have an all new and updated cover and paperback version. And keep an eye out for a special price on the Kindle edition of The Man Who Crossed Worlds in about a week.

And remember, if you want me to email you as soon as the book is out so you can get your grubby little hands on it, sign up for my New Release Mailing List.

Catch you all soon!

Cover Art for "The Man Who Crossed Worlds"

Posted by chrisstrange1 in Uncategorized on August 1, 2011

It’s a hell of a feeling, seeing your characters for the first time. Of course, you see them in your head all the time, and you do your best to get those images onto the page, but it’s never quite the same as actually seeing the character with your own eyes.

As the sort of guy whose stick figures send small children running in terror, it amazes me how visual artists can convey so much information instantly. So when the cover art for my upcoming urban fantasy novel popped into my inbox, I was practically doing a jig (you don’t want to see me dancing; trust me, it’s not a pretty thing).

The cover is both fun and dark, full of motion and action, and unashamedly pulpy. Most importantly, it doesn’t take itself too seriously.

In short, it IS my novel.

I offer my sincerest thanks to my artist, Hiep Ha Dzung, for creating such awesome artwork. I’m incredibly grateful to have had the chance to work with him.

Perhaps if people are interested I’ll do a blog post in the future about how I went about commisioning an artist. But for now, without further ado, I’ll show you the artwork. I hope you like it as much as I do.

All Miles Franco wants is a cold beer and a bit of peace and quiet. What he’s got is an empty wallet, a shoebox apartment in a city run by gangsters, and a job that looks set to put him in an early grave. Miles is a freelance Tunneler, a man who can open portals to transport people from Earth to an alternate dimension known as Heaven.  Not the real Heaven, you understand, the one with angels and harps and lists of who’s been naughty and who’s been nice. This Heaven is a hell of a lot stranger.

When the cops haul Miles downtown for smuggling the natives of Heaven to Earth illegally, they offer him a choice: help them bring down a mysterious drug lord and his interdimensional drug-smuggling operation, or face a long stretch in the pen. Which, of course, is no choice at all.

But when Miles starts playing police lapdog, he soon figures out this ain’t no ordinary drug he’s dealing with.  Some nasty people are willing to spill a lot of blood to protect their interests, and Miles is about to learn that nosing around in gang business is a dangerous job in a city where everyone’s on the take and the gangsters play for keeps.

So much for that peace and quiet.

THE MAN WHO CROSSED WORLDS