My hardboiled urban fantasy, The Man Who Crossed Worlds, just got a mention on the latest Kobo Writing Life blog post, courtesy of the brilliant Maria Schneider of Bear Mountain Books.

Check the link if you’re looking for some more fantastic fantasy or mystery reads.

First up, my thanks to eBookSoda, who are featuring Mayday today. They’re a great little readers’ site like BookBub where they send you ebook recommendations tailored to your taste. www.ebooksoda.com. Check them out if you’re after some cheap books!

Now, onto my thoughts about Godzilla 2014. Minor spoilers ahead!

Oh man. It’s been a long time since there was a movie to split the kaiju fanbase like Godzilla 2014. For some people, it was the big budget version of the King of the Monsters they’d always wanted to see. For others, well…

Let me get this out of the way up front. I didn’t dislike Godzilla. It had a lot going for it. I was getting hyped just from the awesome credit sequence at the beginning. We’re treated to a montage of nuclear testing around Bikini Atoll, with the clear implication that they weren’t tests at all. The score is fantastic during this opening, really getting you in the mood for what promises to be a dark, ominous monster movie, a true successor to the original 1954 Gojira.

The first act follows Bryan Cranston’s character as the mystery is built and the tension rises. There’s something out there, something bad, and it’s not clear whether anyone is going to be able to stop it. Bryan Cranston’ acting is amazing as usual. As the mystery builds, it looks like Cranston is going to have to team up with Ken Watanabe’s character, a scientist dedicated to studying creatures like Godzilla, to uncover the truth behind the MUTOs, a pair of monsters from prehistoric times that feed on nuclear energy. I was pumped.

And then at the end of the first act, the movie dies. Bryan Cranston drops out of the story and we’re left following his son, Lieutenant Bland of the US Navy. All Lt Bland wants is to get back to Mrs (Dr) Bland and Little Boy Bland so they can reform their perfect nuclear family. But in the meantime, Lt Bland stumbles around, somehow falling into every military operation that has anything to do with the monsters because apparently no one else in the entire US military knows anything about the nukes they’ve decided to deploy against the MUTOs.

Occasionally the movie flicks back to Ken Watanabe, who it turns out only exists to tearfully deliver lines of exposition and wisdom that aren’t nearly as profound as the movie seems to think they are. Other times, we go to Mrs and Little Boy Bland as they sit there wringing their hands, asking “Where’s Lt Bland? Why isn’t he here yet?”

Sure. Sometimes. For a few seconds. Before the camera cuts away to Mrs and Little Boy Bland watching TV. Not just once, but again and again. For most of the movie, it just teases us, giving us a glimpse of the monsters before cutting away again.

And therein lies the movie’s problem. I totally get what they were trying to do. A slow build to a final, massive reveal is a great way to build tension. If it’s done right. If we become invested in the human characters. If we’re not dragged away from the interesting parts to focus on characters who have no character traits except “wife” or “soldier man”.

The original 1954 Gojira did a fantastic job of this. Godzilla only appears for a relatively short period of the film’s total running time. But his shadow hangs over the whole movie. The human characters are actually interesting. Consider Dr Serizawa, a scientist who has developed a weapon that might be Japan’s only defence against Godzilla, but who fears that weapon might be even more devastating than the atomic bomb if the world learns of its existence. That’s a character I can get behind.

And the most frustrating thing is that Godzilla 2014 nearly had that. Bryan Cranston’s character, an obsessive, guilt-ridden truth-searcher, was interesting. He had a clear arc. He had perfectly valid reasons to become involved with the monsters and let us share in both the human drama and the monster action. He should have been the main character. By teaming him up with Watanabe’s character, we could have a couple of truly great actors in truly great roles to make a truly great movie.

But instead, Cranston’s character is tossed aside and barely mentioned again after the first act. All we’re left with is Lt Bland, who along with his military chums manages to achieve almost nothing of value in the entire movie. I’m not kidding about that. We spend all this time following the military as they make dumb decision after dumb decision, none of which have any effect whatsoever on the film’s conclusion. Lieutenant Bland spends most of the second half of the movie trying to clean up the military’s mistakes while they sit around twiddling their thumbs, waiting for Godzilla to show up and save them. Godzilla becomes relegated to little more than a convenient deus ex machina who exists only to beat up the MUTOs at the end.

Even Godzilla seems to know that. After the humans fail to do anything once again, Godzilla finally sighs, drags himself out of the ocean, and solves the problem that the humans were too inept to deal with. But it takes so long to get there that by the time we actually see the monster action in the last ten minutes or so of the film, the movie had nearly lost me. And that’s a shame, because that last action is very good. It’s everything a Godzilla fan could want out of a final battle (as brief as it was). But I don’t know that it’s enough to save the movie.

I know it sounds like I’m being really harsh. But I didn’t hate this movie. I just feel like it was so close to being so much better. I know a lot of people enjoyed it, and more power to them. I’m just disappointed that I wasn’t able to love it as much as I hoped I would.

I sincerely hope the movie does well enough that a sequel is made. I love that kaiju are finally making their way back into the public consciousness of the West. I just hope that they can take a few lessons from Godzilla 2014 and deliver an even better sequel, one that understands what it’s trying to do, one that doesn’t cave to the pressure to have Mr Generic Military Man and his nuclear family as the main characters, one that strives to create characters we can be interested in. 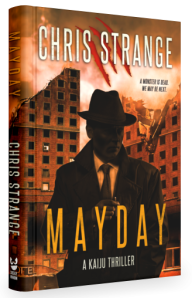 I’m very excited to announce that my hardboiled/giant monster mashup novel, Mayday: A Kaiju Thriller, is now available! If you’re excited about the new Godzilla movie, this is the book for you. It’s available right now in ebook forms on Amazon, Kobo, Apple, and Smashwords. . Now available at Barnes & Noble as well! And if you prefer to read in paper, the paperback is also available on Amazon.

As a special thank you to all you fantastic folks, the ebook version of Mayday is only $0.99/£0.77 (or equivalent) at all of the above outlets for the next week. So get in quick and grab your copy before it goes back to the full price of $4.99.

I’d really appreciate it if you could help me spread the word about Mayday. Tell a friend, write a review, or post a link on Facebook. Anything you could do to help would be fantastic.

You guys are the best. Happy reading, everyone!

My giant monster/hardboiled detective mashup novel is about to be released! Get hyped!

For the first week or so, MAYDAY will be heavily discounted–my way of saying thanks to all you awesome folks. If you don’t want to miss the special price, sign up for my New Release Email List and I’ll send you an email as soon as the book is available.

If you’ve ever reviewed one of my books before, either on your blog, a dedicated review site, Goodreads, or a storefront like Amazon, I’d love to give you a free review e-copy of MAYDAY. Just email me at chrisstrangeauthor@gmail.com and let me know you want a review copy.

If you’ve been meaning to leave a review for one of my books and haven’t gotten around to it, you can post one any time before the end of May and I’ll still be delighted to send you a review copy of MAYDAY. It doesn’t matter whether the review is positive or negative, so just be honest!

Now with all that out of the way, here’s the blurb for MAYDAY: