Stalker’s Bounty is out now! 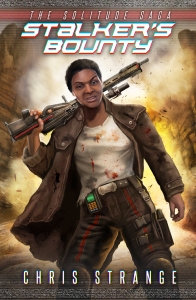 I’m pleased to announce that Stalker’s Bounty is now available!

This is the second book of my sci-fi adventure series, The Solitude Saga. Set amid the last days of a doomed star system, the saga follows Eddie Gould and Dominique Souza, bounty hunters that travel across the system, tracking down fugitives for a corrupt government.

The Solitude Saga novels can be enjoyed independently, so check it out even if you haven’t read Stalker’s Luck.

One last thing: If you’ve ever reviewed one of my books before at Amazon, Goodreads, or anywhere else, email me at chrisstrangeauthor@gmail.com and I’ll be happy to send you a free review e-copy of Stalker’s Bounty.

TO SOME, ARKAS IS A TERRORIST.

TO OTHERS, HE’S THEIR SAVIOUR.

TO THE CREW OF THE SOLITUDE, HE’S THEIR NEXT PAYDAY.

Following a devastating campaign of sabotage on a vital agricultural colony, the figure known only as Arkas makes his final threat: if the Federation fails to meet his demands within five days, he will permanently cripple the star system’s food supply.

Bounty hunters Dom Souza and Eddie Gould have the contract on Arkas’ head. But as they race to find Arkas before the deadline expires, Dom begins to doubt everything she was told about this so-called terrorist.

As the fires of rebellion spark across the colony, Dom will have to unravel the truth behind Arkas. Because if she can’t, her bounty will turn to dust. And the colony with it.

This entry was posted on March 7, 2015, 6:04 pm and is filed under Books. You can follow any responses to this entry through RSS 2.0. You can skip to the end and leave a response. Pinging is currently not allowed.