Ever wanted to write a book? Join NaNoWriMo. 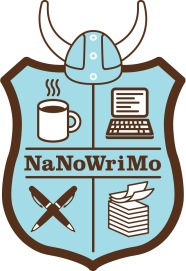 In one month’s time, half a million of the bravest and craziest people from around the world will participate in what is quite possibly the greatest writing event in the history of mankind: NaNoWriMo (National Novel Writing Month).

Most of these people aren’t professional writers. They’re just average folks of questionable sanity who thought it might be fun to write a book.

Each year, NaNoWriMo participants commit to writing 50,000 words of fiction between 12:01am on November 1st and midnight November 30th. I’ll save you the math: that’s about 1667 words per day.

Those who achieve this goal will be bestowed with the glorious title of “Winner,” which comes complete with a neat little certificate and bragging rights.

But of course, that’s not the real prize. When you wake up a Winner on December 1st with a writing-induced hangover, you’ll be able to look at the novel you’ve written. It might not be finished, it’ll be probably filled with typos, there’ll be plot holes you can fly a space ship through. But you know what? None of that will matter. Because that will be your book.

It came out of your head, and it’s down on paper now because you worked your ass off to put it there.

Some of you are probably reading this, saying, “So what? What’s the big deal? Why would anyone want to put themselves through that?”

But I think there’s a few people reading this right now who have always wanted to write a novel. Maybe you never got around to it. Maybe you were worried it wouldn’t be good enough. Maybe you were afraid of looking like an idiot. Maybe you thought you could never be that creative. Maybe you just didn’t have the time.

If that sounds like you, I’m here to tell you to do NaNoWriMo.

Maybe you’ve heard of NaNoWriMo before, maybe not. Doesn’t matter. If you’re even the tiniest bit interested in this crazy challenge, I strongly urge you to head over to nanowrimo.org and have a look around. There’s no catch. No cost. It’s a personal challenge, with hundreds of thousands of like-minded individuals around the world doing the same thing alongside you.

I did NaNo for the first time in 2010. Until then, I’d written a few short stories and started a couple of novels, but I’d never finished any. I always lost the enthusiasm for the book, or real life got in the way and I never ended up finishing it.

Then I did NaNoWriMo. This stupid challenge gave me the focus I needed to sit down every day and put words down on the page until the novel was completed. I had work and university to deal with, but I carved out time to write whenever I could.

I passed 50,000 words by the end of the third week and went on to write another 10,000 words and finish the novel before the month ended.

The book was silly and not that great. But that didn’t matter. I saw that I could actually finish something as long as a novel. And I now knew that even though it got tough sometimes, I could push through and reach the end. Which, really, is the biggest part of being a novelist.

If I hadn’t done NaNoWriMo, I don’t think I’d be a writer today. I’d still think about writing, and I’d come up with cool ideas. I’d write a couple of chapters here and there. But I wouldn’t have the perseverance to actually turn those ideas and chapters into full novels.

It’s been a few years since I officially did NaNoWriMo. And I think it’s about time I went back to my roots and did it again.

In a week or two I’ll talk a little bit about what I’m planning to work on this November. But for now, I just want to offer some encouragement to anyone out there thinking about it. Head to the site, sign up, have a browse around the forums, and make a commitment to yourself.

You can do it. You know you want to.

A – The adulation of your peers and the knowledge that you worked hard to bring a new story into the world.

A – What more could you want?

A – This site has a great list of word counts of famous novels. 50,000 words is pretty short for a full novel, especially in some genres like sci fi and fantasy. That’s a good thing. You don’t have to write some huge doorstopper to win. 50,000 words is achievable. And that’s the key to this entire thing. It can be done. I know. I’ve done it.

A – Here’s the thing: you’re never going to have time to write 1667 words a day. I know you’re busy. But if you want to write, you have to make time. Let your friends know that you’ll be a little less available this November. Take a notebook wherever you go and write out a couple of paragraphs when you’re waiting at the doctor’s office. Lock yourself in the bathroom with your laptop and feign constipation. Wake up early, go to bed late. Eschew basic cleanliness and forsake loved ones to carve out a few minutes here, an hour there.

I’ll have more tips on this later. Just don’t let “I’m too busy” be your excuse.

(Note: Do not skip exams, job interviews, or urgent medical treatment to write your novel. It’s not that important, seriously.)

A – I’m going to let you in on another secret. If you write even one more word during NaNoWriMo than you would have normally, you’re a winner. Maybe you won’t be a “Winner” by the definition of the Official Rules. But remember, this is a personal challenge. The only way you can fail is if you don’t try.

If you “only” write 30,000 words, fantastic! That’s a great achievement. If you write 3000 words, good job! That’s 3000 more words of fiction than most people write in their entire lives. Whatever you do, just write!

A – Ideas are cheap. You’ve got a whole month to come up with something. I’ll have some more tips on that later in the month. But don’t worry about that yet.

A – Have you ever read a book? Seen a movie? Watched TV? Then you’ve got the gist of it. Humans are a species of storytellers and story consumers. Once upon a time we sat around the fire in our loincloths and told each other stories about the mammoth that got away. We spend our entire lives immersed in stories. Sure, telling a story is a craft, and like any craft you get better with practice. But you have an innate understanding of story. And if you never try to write one, how will you ever learn?

Q – What if I put in all this effort and the book ends up being shit?

A – Put all thoughts of quality out of your head right now. Right fucking now. That’s your inner editor talking. And from now until the time you finish your book, he is your enemy. He will try to trip you up every step of the way. He will tell you you’re not good enough to write a book. He’ll laugh at you when you can’t find the right words. He’ll compare your novel with your favourite books and he’ll tell you point-by-point why your work will never match up to those greats.

Fuck. That. Guy. Kick him in the teeth and leave him bleeding in the corner. He wants you to quit. Do not let him win. This isn’t about quality. This is about sitting down and writing. Because nothing is more worthless than a book that doesn’t exist.

Q – All right, all right. But say I finish the book. What then?

A – That’s up to you. Maybe that’ll be enough for you. Maybe you’ll just smile to yourself and know that you can now say “I wrote a novel.” Even if you go no further than that, you will have gained a new appreciation for how stories are created. You’ll be able to read your favourite authors with new eyes. You’ll be able to see how they constructed their characters and their plots. That’s worth the price of admission alone.

Or maybe once you’ve finished that first novel, once you know you can do it, you’ll go on to write more. Maybe you’ll share your book with your friends and family, or maybe you’ll hone your craft and go in search of a wider audience.

Once November’s over, I’ll have a few more tips on what to do with your fresh new novel. But that’s something to worry about later. For now, the important thing is to get that first book on paper.

A – Head over to nanowrimo.org and sign up. It doesn’t cost a cent (although they do have a donation drive later on in November if you’d like to support them). Then tell everyone who will listen what you’re planning to do with your November.

Be aware that most people will look at you like you’re crazy. That’s okay. They probably enjoy weird stuff too, like pickling vegetables or watching tennis. But it might help explain why you haven’t showered in three days or why you keep zoning out in the middle of conversations to think about some new plot twist.

And maybe, if you’re very lucky, one or two of the people you tell will light up and say something like “I always wanted to write a novel.” That’s your chance. Grab them and browbeat them until they sign up as well. Like starting a new exercise regime, doing NaNoWriMo is a lot easier if you’ve got someone else to make sure you’re on track.

All right, that’s enough from me. Over the course of October and November I’m going to be sharing some more tips, shouting encouragement, and talking about what I’m writing for NaNoWriMo.

Until then, stay awesome everyone.

This entry was posted on October 1, 2014, 8:28 pm and is filed under Books, writing tips. You can follow any responses to this entry through RSS 2.0. You can leave a response, or trackback from your own site.