May is Zombie Awareness Month, so I decided it would be apt to write a post on how to survive after 90% of the population have turned into dead cannibals and are trying to gnaw on your legs. As you read this guide, remember that adaptability, above all else, is the key to surviving post-Z-day. This guide, like any others, is just that: a guide. Use your best judgement, and hope that it doesn’t result in your untimely demise (and reanimation).

I’m not referring to whether the zombie is created by a virus (e.g. Solanum) or through supernatural means. That don’t matter a bit. I’m talking about more practical distinctions.

There are generally considered to be two types of zombie: fast and slow. If the zombie apocalypse involves slow zombies, consider yourself lucky. You can fight off or run from a slow zombie more easily. Individual zombies can be separated from the horde and taken out one-by-one. Chances are you’ll be laughing all the way to the reconstruction of society.

If you’ve got fast zombies, though, you’re in trouble. These things will be on you quicker than you can say, “Oh fuck, I’m going to die a virgin then have my innards ripped out and eaten. I’m kinda bummed about this situation, to be honest.” Your best chance of surviving fast zombies is to shut the fuck up and find a good hiding place. Ensure your group is the right size: not so many people the zombies are attracted for a tasty snack, but not so few you’ll end up facing an attack without brothers-in-arms. (Or to have someone to throw into the path of the zombies. Take one for the team, bro!) Which brings us to our next point…

You notice how in every zombie flick there’s always a few annoying/selfish/cowardly people who get everyone else eaten?

Kill them. Kill them now. Or just blindfold them and dump them out in the zombie-infested city if you’re not the murdering type. You’re doing them a kindness. Well, not really, but fuck them. You don’t want them around. You need people in your group who are skilled in some way. Expert killing machines are always a good one. Doctors, too, as long as they’re not too compassionate. Anyone who can jerry-rig some explosives or fix a SUV with only some duct tape and rubber bands. As for anyone with no useful skills, they have to go. Homeopath? Lawyers? Beauty therapists? Zombie food waiting to happen. (Note: if you are say, a writer, you’re going to have to fake some skills if you don’t want this to happen to you.)

Maybe you’re feeling a bit squeamish about leaving all these people to die. Well that’s because you haven’t reached Step 3…

3. Cut All Ties With Your Humanity:

Lots of people are going to die. Your family is going to die. Same with your friends and the cute chick that works at the movie theatre. And they’re not just going to die. They’re going to get back up and try to eat you. If you hesitate in killing them, you’ll be joining them. Once you learn to embrace your deep-seated sociopathic tendencies, you’ll end up safer and happier.

Say you’re running with your family from a zombie attack and your cute little son trips over. Now, a normal, well-adjusted person would stop to protect their child. And then what happens? You get eaten, along with anyone else in your family stupid enough to stop as well. Not cool.

But if you’ve become dead inside, you will actually see this as an opportunity. The zombies will stop chasing you to enjoy some nice juicy child flesh, leaving the rest of your family alive and with one less mouth to feed. If all your family members are too nimble-footed to trip, consider pushing one of them.

Many people, especially you Americans, will pull out their shotguns and assault rifles and Stinger Missiles at the first sign of a zombie apocalypse and try to shoot the zombies like they’re playing Call of Duty.
Stupid. Fucking. Idea.
Here’s why: you’ll kill some zombies. Whoopdee-fucking-doo. But you know what all that gunfire’s going to do? Attract more zombies. From miles and miles around, they’ll come for you.

Great. Until you run out of ammo. Then, instead of the ten zombies you started out facing, you’ve got 200 of the bastards bearing down on you, and you’re sitting there with your empty Glock looking sad.

No, you want weapons that are quiet and can either decapitate the zombie or destroy its brain. Swords, axes, decent sized bats. Whatever you’re comfortable with. If you absolutely must have a firearm, use it only as a last resort, then get the hell out of Dodge before more zombies show up. 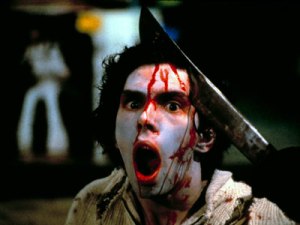 Oh, and don’t be a moron and try to set them on fire. How long do you think it’ll take before that fire destroys the zombie’s brain? In the meantime they’re still going to come at you, and then you have to deal with a FLAMING FUCKING ZOMBIE. This is much worse, for obvious reasons. And that’s not even counting the risk of setting your hiding place on fire and burning yourself to death.

Chances are, if a zombie apocalypse comes, you’re going to die. Sorry, but it’s the truth. If you do happen to be one of the lucky ones, remember: the future of the human race depends on you. So be smart, know your exits, and DON’T GET BITTEN!

This entry was posted on May 17, 2011, 4:31 am and is filed under random, zombies. You can follow any responses to this entry through RSS 2.0. You can leave a response, or trackback from your own site.